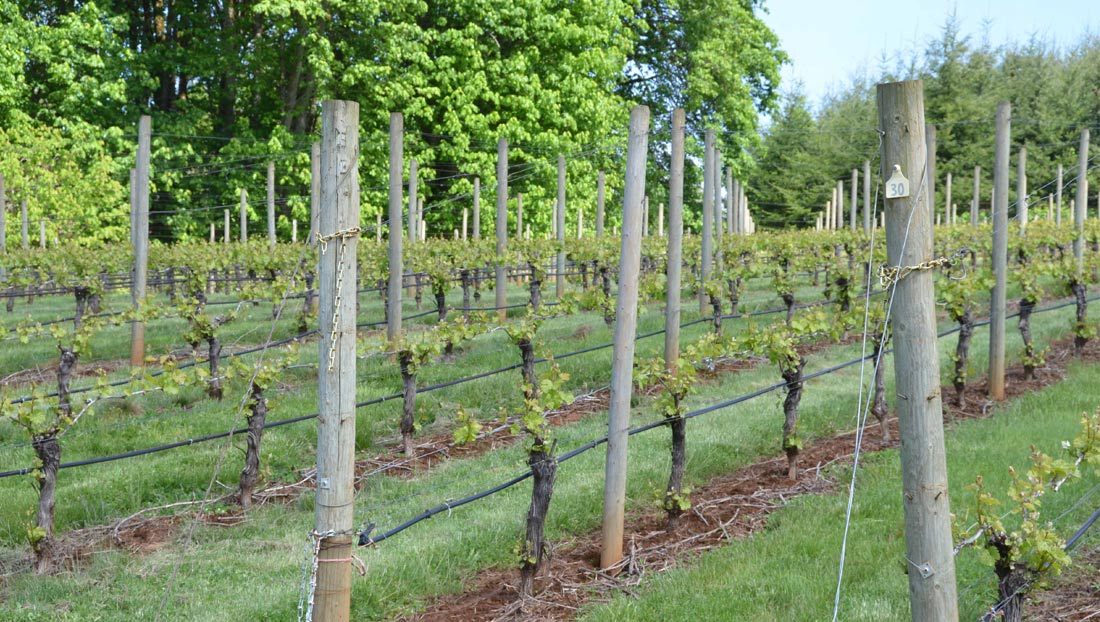 Posted at 15:55h in Annual Letters by Brian Richardson
Share

In a note written to our son Jeff, I bemoaned that I had no hard luck story to tell about Lazy River 2014 harvest. What can be very interesting to our readers about a great year? The sun shone for months. The vines held gorgeous fruit that had not frozen, been hailed on or drowned in a storm like the five inches that fell last year in September. Ned sold our Pinot Noir to a Who’s Who list of Oregon winemakers. Four of them will use Lazy River as a vineyard designate on their labels. There were plenty of good pickers, unlike last year when our grandchildren picked for two whole days to fill the void. There was no visible botrytis, a grayish mold in the middle of grape clusters. Can we just settle back and enjoy this, or should we think along the line that Mother Nature will get us next year? Ah farming.

Significant changes took place in the vineyard. Our marketplace wants Chardonnay grapes and wine. The Riesling was grafted over and in the fall of 2015 we’ll have our first harvest. Expect a small Chardonnay offering in a couple of years. Two more varieties of Pinot Noir added to the seven clones planted more than a decade ago. These recent arrivals are considered “heritage” grapes and are being fermented separately so we can understand better their flavor profiles. Will we produce a second label? Will we blend them into our other barrels? We will see.

Welcome Isabelle Meunier, winemaker par excellence, and Lazy River’s new guru. Isabelle won Sunset Magazine’s Winemaker of the Year award. Her work at Evening Land brought admiration industry wide. We are thrilled. We’ll really miss Robert Brittan, who regretfully leaves us thereby avoiding dozens of 45 mile round trips to check on the grape vines and to make our wine. His own winery Brittan is growing rapidly.

The Lumpkin Family thoroughly enjoys the chance to visit with our customers at the annual Release Party. Scheduled this year for Friday, November 14, 5-8 pm at 1212 42nd Avenue E., Seattle. For the first time there will be The Vertical, a tasting of 4 consecutive years of our Pinot Noir. One can savor the full range of Lazy River style and gain a better understanding of its profile.

First, the 2009, rated the 15th best Pinot Noir in Oregon and the bestselling wine in our tasting room. The wine tastes fruit forward, rich, layered with a long finish. Delicious.

Second, the 2010, very typical of Burgundy has a fruit profile reminiscent of cherry and raspberry, typical of all our wines. It finishes long and deep, a wine that will compliment turkey, salmon, veal, pork, wild mushroom, truffles and a number of risottos and pastas. It is lighter than the ’09.

Third, our 2011 in wine parlance is “coming around.” It was a cool year. For a while tannins and acids dominated the bottles. However, slowly and surely its familiar basic Lazy River character moves forward. It has a long finish, black currant, a certain meatiness, a bit of smoke and of course, the ever present cherry. What will be of particular interest is that with this wine we will offer the 2007 (sold out) which evolved from a similar start into a remarkable finished wine that customers still ask about.

Fourth, our 2012. Likely the vintage of the century. Isn’t that fun to write? This is its first release. Dense, layered, complex, cherry, fruit, add in hints of almond, Kirsch and even a bit of violet. Really young this wine will age into a spectacular vintage. Drinks well right now too. How long can one keep this? Our 2002 is drinking beautifully.

Lazy River Vineyard resonates with visitors. This year we had a lively group from El Paso, who have traveled to wine areas throughout the world. Their limo arrived at three o’clock on a blistering August day. When we walked out to greet our visitors, the peek inside showed a bunch of tired, hot and maybe reluctant wine tasters. They did not want a vineyard tour and they were expecting a winery, which we don’t have on the property.

Instead they plunged into comfortable chairs on a deck outside our dining room. We had cold water, charcuterie from Nick’s in McMinnville and lots of wines to taste. They were here because one of the wine group was celebrating five cancer free years and had tasted a bottle of our wine years ago. He wanted to see Lazy River, so special arrangements were made. They were blindsided by the quality of our Pinot Noir, the same Pinot Noir most of you have enjoyed for years. The five couples ordered cases. By the end of the afternoon the temperature had dropped and they were reinvigorated. Ned and I had a great time.

In what has become an annual harvest event our kids and grands showed up to help pick grapes. For the younger kiddos, an enticing motivation is earning dollars. The pay comes in cash and is a bit higher (not much) than prevailing rate. Picking days are shorter because there are other important things to do. They deliver the fruit in Grandpa’s old red truck and refresh themselves with a lunch at the incomparable Martha’s, Mexican food, in Lafayette, OR.

Late Saturday afternoon while Toby and his friend cooked, the rest of us settled in around the dining room table. Alden, 14, declined the chance to play Bingo. He needed to detail a large map of the United States. His Auntie Anna offered help. After learning she held a degree in Geography with an emphasis on map making, the project became less onerous. They had fun. In the meantime at the other end of the table, Uncle Scott joined in the Bingo, as he said, practicing for his decades away time in a retirement home. The Bingo group cheered and groaned.

Dinner found the elders drinking old Lazy River wine, laughing and talking. The younger set chose from four flavors of Tillamook ice cream. Later that evening arrived Jeff and Vernon, 9, whose elite soccer team had played two games that day. On Sunday, it was back to the hill for more picking. It is a good life.

Our best and our thanks for your enjoyment of Lazy River wine.